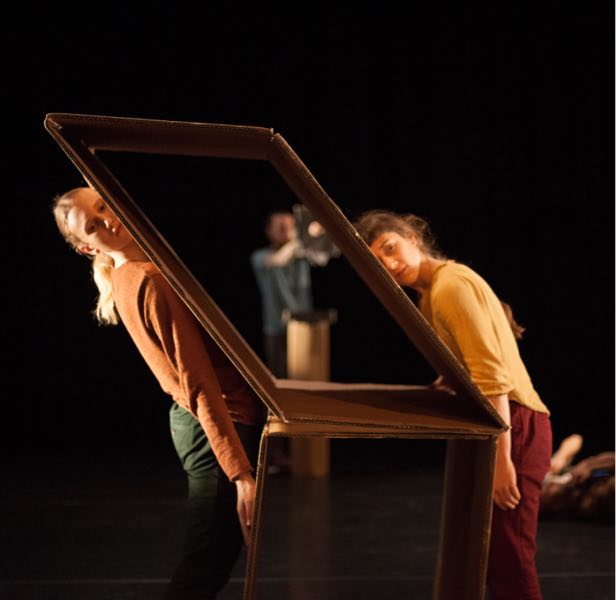 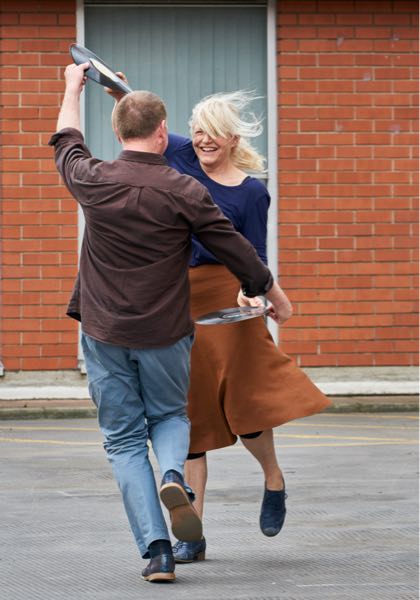 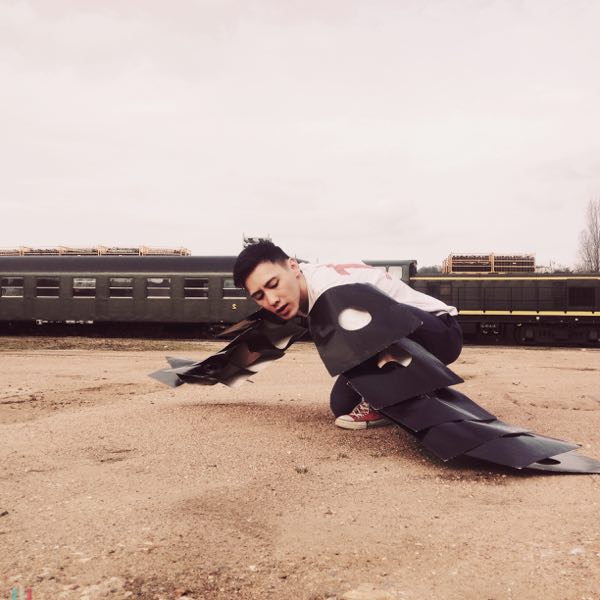 “The apprenticeship has helped me immeasurably in my transition from being a student of contemporary dance to working as a professional in a professional company. The support from Maresa and all members of the company, working with such skilled artists from such diverse backgrounds, has provided me with the skills and confidence to develop my career as a dancer and choreographer. Maresa’s work has been hugely inspiring and has influenced my own practice and choreographic work, in particular the way that objects and object manipulation are used.”
Anders Duckworth, Apprentice 2014/15, professional company performer since 2016

“I have been extremely fortunate to become part of the company at the age of 57. I have found working with Maresa von Stockert and the other dancers in the company very transformative. I find that Maresa creates a very poetic ageless space where you are free to discover your inner world and movement. The creative energy and support within the company has definitely helped to fire and inspire my own work in physical theatre. Maresa challenges herself and everyone in the company to discover more, so inevitably you do, and so find yourself performing in a way you never imagined.”
Lee Carter, company performer since 2014

“I first met Maresa in 2014 whilst studying on the postgraduate programme at London Contemporary Dance School when she was teaching a 5 week workshop introducing Tilted’s work and choreographic practice to the students. I was invited to join the company a few months later. Being a professional dancer in Tilted Productions has transformed my dance practice and approach to creation processes and creative challenges. Through Maresa, I have learned that (anything is possible) any creative task, challenge or idea has the ability to materialise, to grow and to develop; given its time, trust and investment. The dancers develop a strong sense of ownership of the movement material, of our bodies and the choices we make. The movement explored is intricate, specific, challenging in its rhythms, dynamics, textures, performance and interpretation. Under Maresa’s guidance, the dancers develop intricate articulations across the dancing body, the skill to make compositional decisions in improvisation and practice their collaborative awareness and availability. There is a strong sense of mutual support, care and respect amongst the entire company.”
Tuan Ly, company performer since 2014

“In my 2.5 years with the company I have been given multiple opportunities to develop my practice and advance my career. In progressing from one role to another I have been given trust and responsibility to showcase my existing skills and experience alongside being challenged and supported to develop new ones. I have had the opportunity  to work in various roles broadening my skill-set and potential for future employment across the sector. I have been well supported in enabling flexible working during my pregnancy and had multiple training and development opportunities.
I find the ethos and atmosphere of the company a delight and relish the supportive framework created by the diverse company when developing and touring the work. I highly value the work that the company produces and believe it provides brilliant opportunities for artists like myself who have worked across art forms and have a strong belief in powerful participatory creative experiences for all.” Megan Saunders, company performer 2014 – 16, rehearsal director 16/17, participation producer 17/18, general manger 2018/19

“My dance story isn’t a typical one. Dance wasn’t something that I engaged with until my mid-twenties. In 2010 (aged 25), I was diagnosed with having ankylosing spondylitis, a long-term autoimmune condition that causes inflammation of spine and other joints. I started to suffer great pain, mobility issues and chronic anxiety. I began to attend a movement therapy group and later dance classes, discovering that dance was helping me to reconnect with my body in a positive way. I noticed a positive psychological shift and an improvement in my physical symptoms.
In 2016 I took the opportunity to join Tilted’s piece Belonging(s) as a community participant. Maresa invited me half a year later to join the company for an R&D project and has now offered me a contract as a performer in the company. I would never have dreamed of this back in 2010, when, at times, I struggled to walk. Joining Tilted has offered me a new career path in an area that will nurture my creativity, whilst developing my connection to a healthier body.”
George Fellows, community participant in 2016, company performer since 2017

“I think it is fair to say that dance is generally considered the preserve of the young, fit and ‘body beautiful’, so to be able to perform in Tilted Productions’ latest offering Belonging(s), as my 65th birthday approaches, has been a hugely exciting, challenging, and stimulating experience for me!”
Cecil Rowe, company performer since 2014

“I flourished with Tilted. The work was inspiring for its integrity and meticulousness. I’ve yet to work with a choreographer with as vivid and singular an imagination as Maresa.”
Amy Bell, company performer 2007-2012, rehearsal director 2011/12, current board trustee